The optimistic outlook comes after charities saw improving results in 2012, when 58 percent of groups reported an increase in donations, up five percentage points from 2011. A quarter of the charities, mainly smaller organizations, said contributions dropped last year, while the rest held steady.

“Overall consumer confidence in the economy rose last year and that created a more positive environment for charities to go out in and build relationships [with donors],” says Andrew Watt, president of the Association of Fundraising Professionals, a co-sponsor of the study.

He says giving could slip this year, however, because donors could get turned off by Congressional debates over the deductibility of charitable gifts. But such fears didn’t seem to influence the projections.
“It’s not in the majority of fundraisers’ nature in thinking that the next year will be worse than the current year,” he says.

Even so, some fundraisers are worried that this year could be tough.

“We know from decades of research that giving does follow the economy,” says Melissa Brown, who oversaw the study. “I don’t think everybody feels like we’re out of the woods yet.”
The study of nearly 1,200 charities was done by the Nonprofit Research Collaborative, a group of nonprofits and fundraisers that conducts polls on the state of giving twice a year.

Spending on Technology
Charities say they plan to set ambitious goals in 2013, and make investments in staff members and technology to bolster fundraising.
Many groups attributed last year’s successes to persuading board members and chief executives to get involved in fundraising and make it the charity’s priority. That support allowed many charities to hire more fundraisers and focused on building better personal ties with donors, especially those who had lapsed in their giving.

Among the other findings:

A third of charities said they made formal efforts to solicit bequests and other planned gifts, the study found, and charities of all sizes that sought such gifts were more successful at increasing planned-giving totals in 2012.

Planned-giving appeals grew in popularity during the recession, notes Ms. Brown: “People would commit future gifts from their estate even though they couldn’t make an annual-fund gift.”

Eighteen percent of charities reported that their organization had a planned-giving goal, and 65 percent of those groups said they either met goals for dollars received or commitments made.
Saying Thanks

Charities that showed they appreciated donors fared better in fundraising, the study found. Groups that thanked their donors within two business days after a gift was made, mailed and e-mailed materials about the organization’s programs and annual reports, or asked them to volunteer were more likely to meet their fundraising goals in 2012 than those that didn’t.

Personal touches helped, too. A handwritten note of thanks, a phone call, a chat about how donors can shape the charity’s future, or an invitation for donors to become leaders in the organization all helped increase gifts.,. What didn’t work: sending donors a gift after they made their contribution or organizing donor-only tours or events that they pay to join. 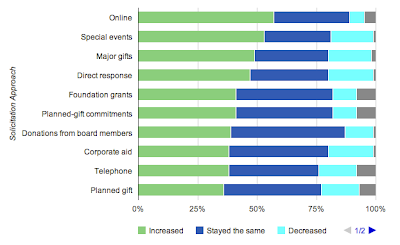